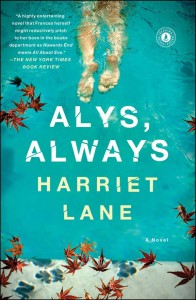 “Harriet Lane’s brilliant first novel… has the momentum of a thriller but not at the expense of an economical lyricism – there is a lovely assurance to the writing. Masterly.”
Kate Kellaway, Observer (Books of the Year)

“This highly entertaining and squirm-inducing short novel [is one] that Frances herself might reductively pitch to her boss in the books department as Howards End meets All About Eve…   A breezy, lacerating first novel.”
Jonathan Dee, New York Times Book Review

“Fabulous… One thing is certain: Alys, Always is an enemy of productivity. I gobbled it up in one furtive sitting. It’s crafted with the merciless but accurate observations and the lean elegance you find in Anita Brookner at her best… Like its narrator, Alys, Always is unforgettable.”
Deirdre Donahue, USA Today

“A deft and lively brain-twist of a thriller for which the only word that seems apropos is “spellbinding.””
Chicago Tribune

“Harriet Lane’s mesmerizing debut is a slow-burning psychological novel that unsettles and satisfies in equal, tantalizing measure—a literary All About Eve that stands testament to the old saying that it’s the quiet ones you have to watch out for.”
Lucy Scholes, Daily Beast

“… I can’t bear to give away anything else; this novel begins with a bang and delivers all sorts of surprises, but also manages some acute observations about bereavement and guilt. A very fine debut. Lane works out her dramatic premise with great originality.”
Kate Saunders, Times

“A superbly disquieting psychological thriller. Lane is a formidable wordsmith, and the literary world is conjured up in all its delicious, gossipy hierarchy… Mordantly funny, yet chilling, this tale of an ordinary woman inveigling her way into a position of power is compulsive reading.”
Leyla Sanai, Spectator

“This chilling and accomplished debut is in classic Ruth Rendell territory. Crucially, the author knows the trick of what to leave out, and of how to tantalise… Most amusing…. Lovely, sensuous prose…”
Rachel Hore, Independent on Sunday

“Wonderfully observed… Lane has her landscape forensically mapped. This is a gripping, psychologically complex achievement, whose greatest success is the lingering sense of unease.”
Sheena Joughin, Sunday Telegraph

“Harriet Lane’s exceptional first novel matches the twisted motivations of Sophie Hannah to the social satire of Amanda Craig’s A Vicious Circle. In Frances she has created a character Daphne du Maurier might have been proud of: vulnerable, manipulative, resourceful, chippy, but one of us.”
Adrian Turpin, Financial Times

“This book really is that rarest of creatures, a sort of literary unicorn: a stunning debut… The writing is tight, it’s compulsively readable and brilliantly controlled. Harriet Lane has a deft economy when it comes to recording scenes descriptions and dialogue. It is utterly believable.”
Rachel Johnson, The Lady

“A suspenseful portrait of the outsider and a satisfyingly bitchy send-up of literary London.”
Catherine Taylor, Guardian

“A compelling fiction debut about a family tragedy. Patricia Highsmith would be proud. Mysterious and suspenseful.”
Tatler

“Frances is a fascinating creation: determined, deceitful, intriguingly complex and believably drawn. As she inveigles herself deeper into the Kyte family’s trust, you find yourself constantly reassessing her character. This deeply unsettling but eminently readable story is one that will linger in the memory.”
Phil Mongredien, Observer

“Harriet Lane’s take on contemporary class is so sharply observed that it becomes almost satirical: the perennial theme of social climbing gets a superb new treament in her highly entertaining, chilling tale of a cuckoo in the nest.”
Phil Baker, Sunday Times

“Alys, Always cleverly shows how… one event ties previously unconnected people together… Lane’s narrative voice is captivating, absorbing the reader almost immediately and throughout the novel’s various episodes of entanglement, separation and high drama. Her use of the present tense means that we are right beside Frances as her story unfolds… and her characters are quirky and believable individuals. Alys, Always is a fine portrayal of how people deal with loss and learn to accept ‘the tinpot vulnerability of human existence’.”
Kirsty Hewitt, Times Literary Supplement

“A marvellous novel. I absolutely adored it… So subtle, funny, tender and so miraculously observed… Utterly brilliant.”
Jilly Cooper

“A clever and original story by an amusing and interesting new novelist.”
Nina Bawden